8 The Most Expensive Hotels in Paris (Current Prices)

The capital of France, Paris, is one of the most beautiful cities in the world. Paris has a reputation for being the most romantic city with a great fashion, cultural, and gastronomic history.

“The City of Love” is undoubtedly one of the most popular vacation destinations due to the Eiffel Tower, the Louvre Museum, Notre-Dame de Paris cathedral, and many more sights to visit.

Although Paris is also considered one of the most expensive cities in Europe, it still attracts over 30 million tourists yearly. And while there are around 2,000 hotels in Paris, only a handful are considered luxurious, with Forbes 5-star rating.

Only around 323 hotels worldwide have the 5-star rating given by Forbes, including 30 five and four-star-rated hotels in Paris.

Continue reading to learn about some of the most luxurious and most expensive hotels in Paris! 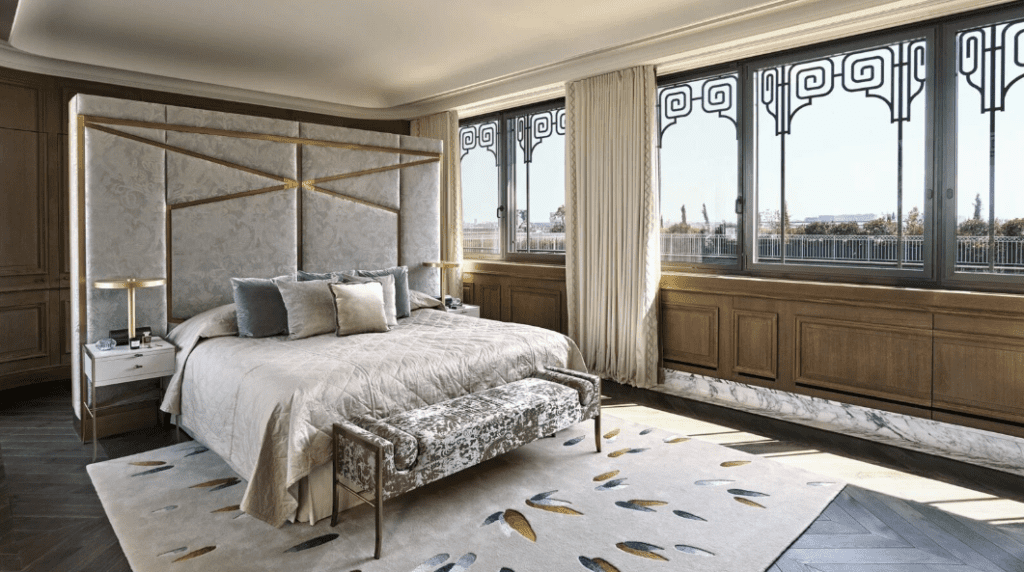 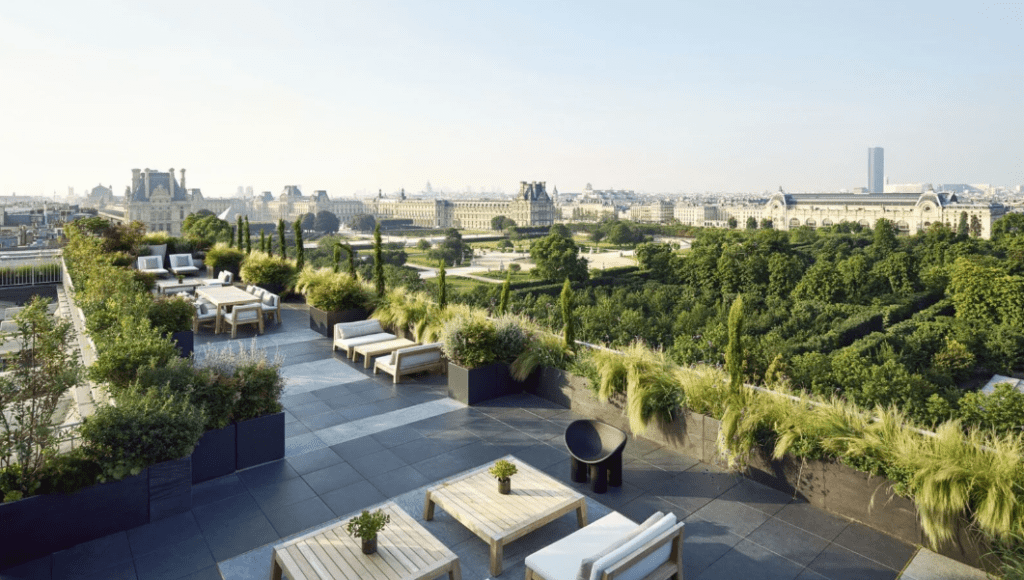 Le Meurice, or The Meurice, is a Brunei-owned luxury hotel in the heart of Paris that opened in 1815. It is nestled between the Louvre museum and the Place de la Concorde, carrying a dash of history within modern-styled rooms and suites. Starting as an inn, the hotel welcomed aristocrats for two centuries.

All 200 rooms kept their original 18th-century charm, with rich textures of silk, marble, and gold details. The rooms are decorated in the style of King Louis XVI, with a royal atmosphere. One night in this French luxury hotel can cost up to $8,800 in a Presidential suite.

Like every luxury hotel, The Meurice offers its guest the Valmont Spa, Michelin-starred cuisine by the renowned Chef Alain Ducasse, and a business center. Le Meurice was a second home to Spanish artist Salvador Dali, so the hotel restaurant Le Dalí is inspired by him. 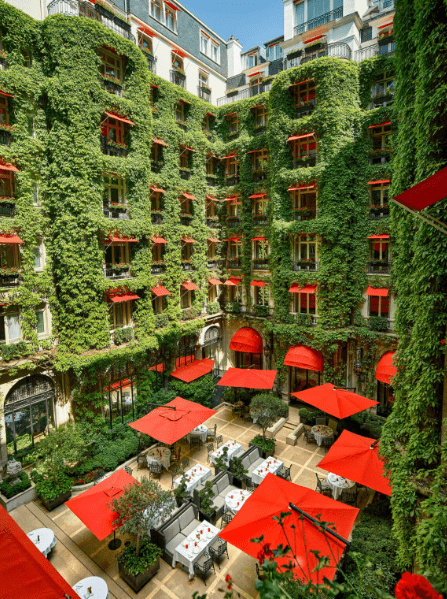 Possibly the closest hotel to the Beauvais Airport on this list, Plaza Athénée hotel is designed as a mix of eclectic 17th-century décor and the modern Art Déco style. The hotel is easily recognizable with carnation-adorned balconies, standing proud between Dior, Chanel, and Louis Vuitton fashion shops.

To spend the night here, one would need around $2,000 and up to $15,000 per night for the Eiffel Suite. The hotel has marble bathrooms, beautiful dressing rooms, spacious rooms, and silk-covered armchairs. One of Paris’ most iconic restaurants, La Cour Jardin, is at the heart of the hotel.

One of the most luxurious offers of the Plaza Athene Hotel is undoubtedly the Dior Spa, which offers signature treatments for deep regeneration of the body, a stone massage, the so-called silhouette massage, and the Dior Prestige treatment for the whole body. 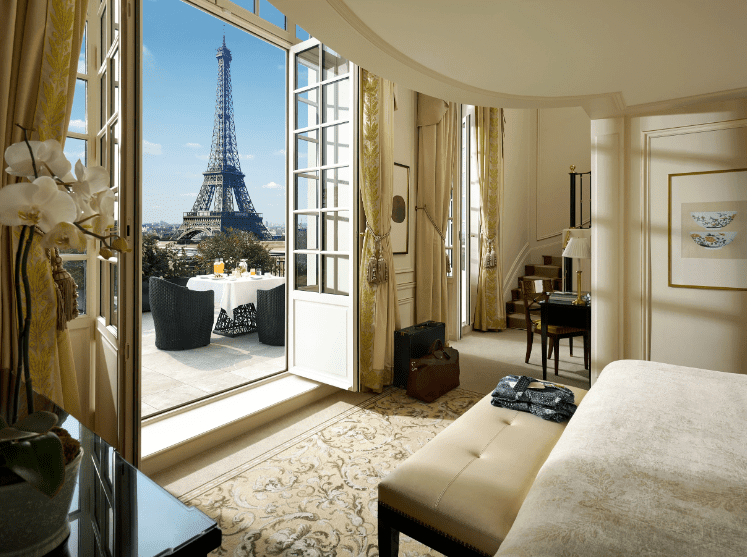 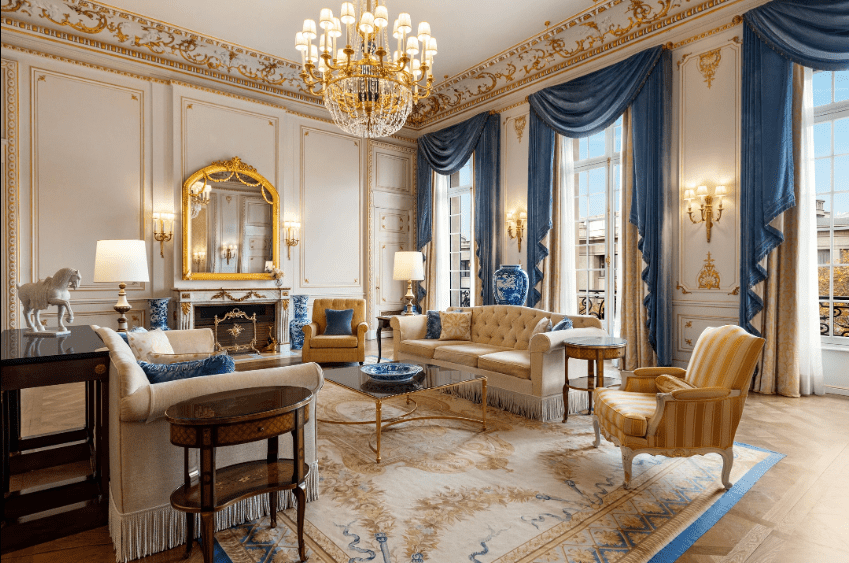 Shangri-La Paris is a hotel today, but the building is part of French history as it was home to Prince Roland Bonaparte. The hotel was opened in 1896, featuring Empire-style decorations, marble bathrooms, heated floors, plush rooms, and an unrivaled view of the Eiffel Tower.

The hotel is close to the Seine River, the Trocadéro Gardens, and Arc de Triomphe. It offers grand relaxation for its guest through a 50-feet turquoise swimming pool, a luxurious spa, fresh cocktails, and three restaurants, one of which specializes in Cantonese cuisine.

The most expensive suite is La Suite Shangri-La, perched on the top floor, and it can cost up to $21,000 per night. This 1,290 sqft suite features custom furniture, drapes from the internationally renowned fabric house Manuel Canovas, a hand-painted chinoiserie cabinet, and pearlescent Lelièvre wall panels. 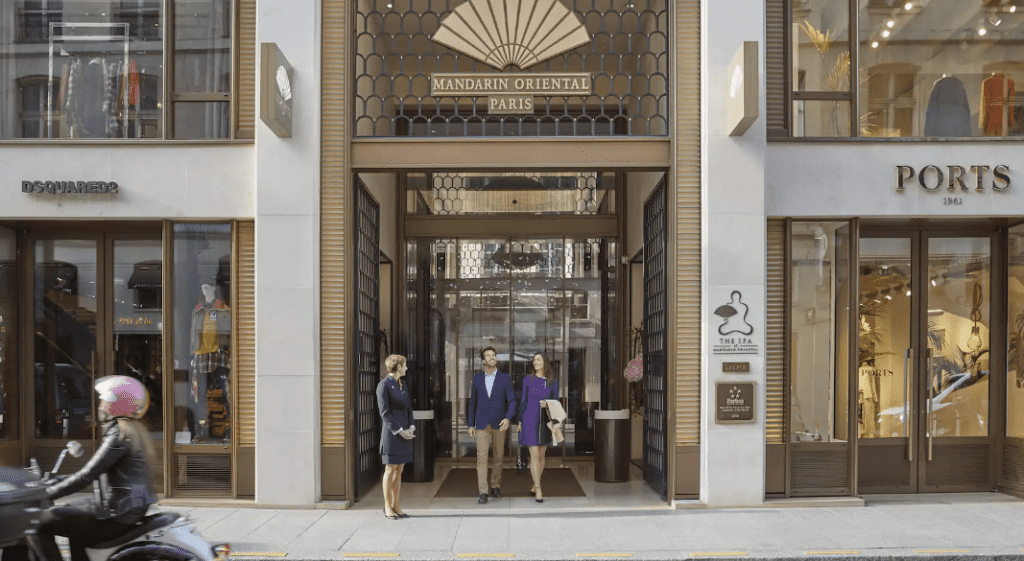 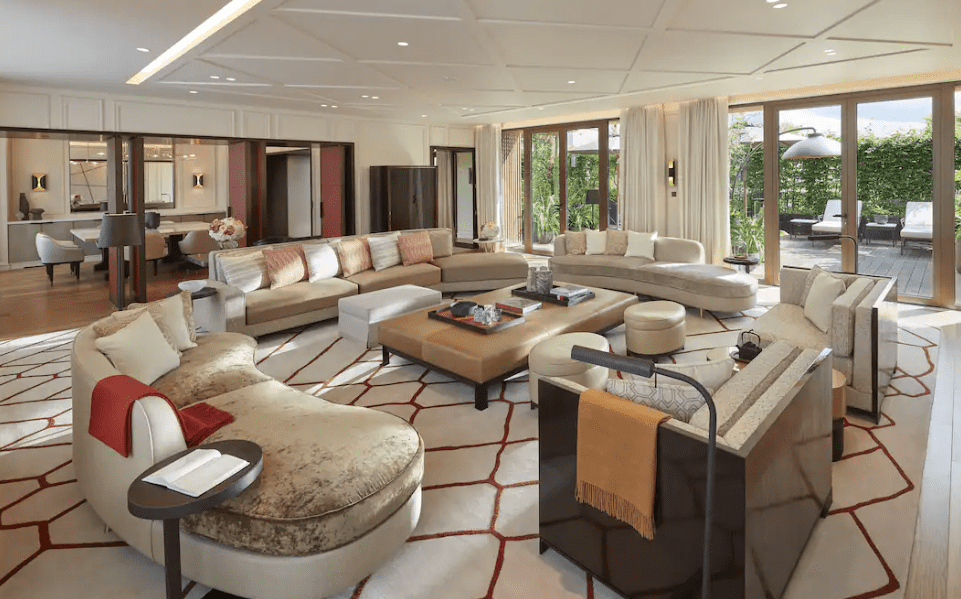 Situated on one of the most fashionable streets in Paris, Mandarin Oriental is only steps from the Louvre museum and the Museum of Decorative Arts. The palace-like hotel was founded in 2011, inspired by the Asian culture and a touch of contemporary Parisian modern style.

The hotel was awarded as one of the Paris top 10 most exclusive hotels, coveted as the “Palace.” The hotel has Theirry Marx restaurant, specializing in molecular cuisine, the Camélia garden, and a 3,770 square feet Royale Mandarin Suite, which can cost up to $22,240 per night. 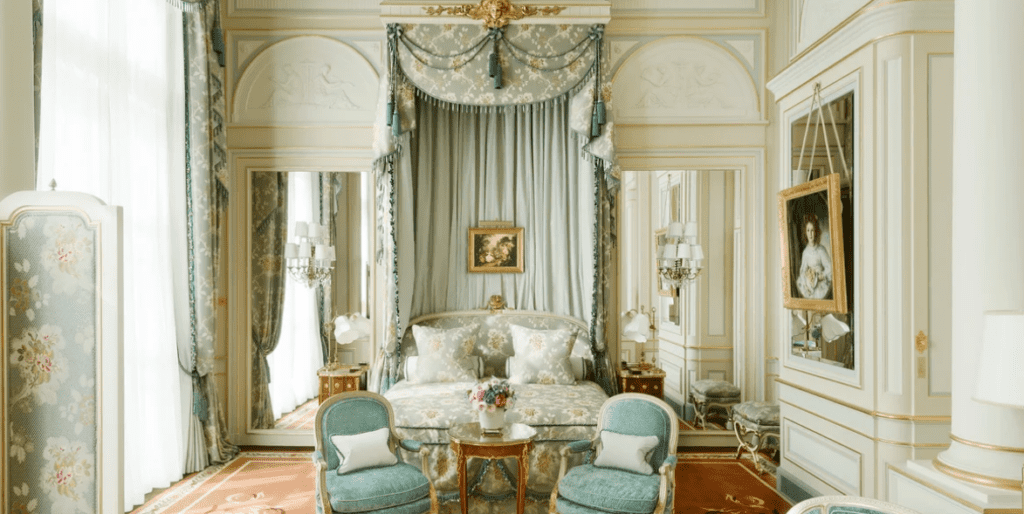 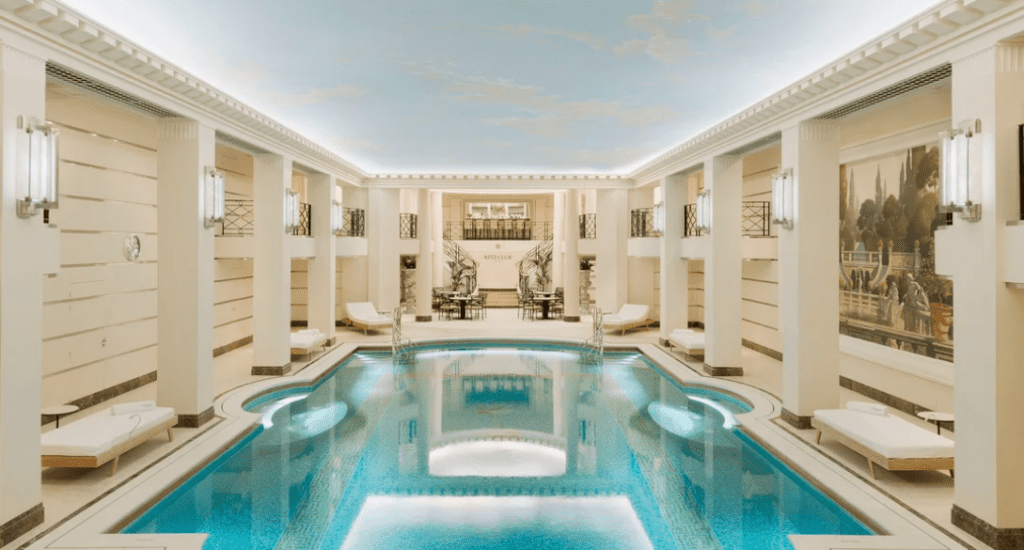 Possibly the most famous hotel on the list, The Ritz Hotel is treated like a royal palace instead. The hotel welcomes guests with gifts and a bottle of champagne before walking up to the luxurious rooms dressed in pastel hues. Guests can expect antique furniture and a lot of gold details in their suites.

Princess of Wales and the first wife of Prince Charles, Diana spent her last night in the Ritz Paris before getting into a car accident that led to her death. It was reported she went out with friends for a ride around the French capital after having dinner in one of the hotel restaurants. 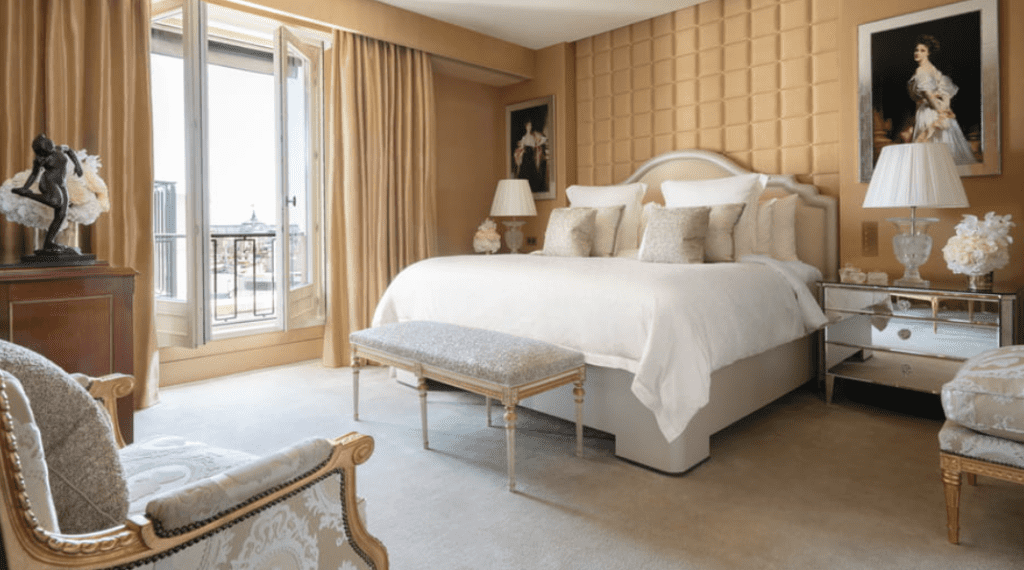 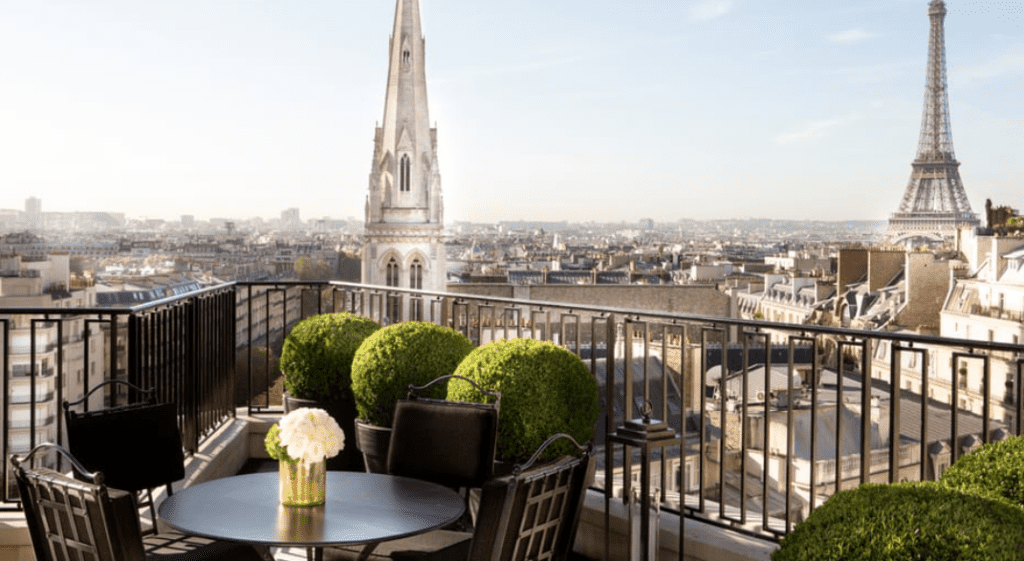 Opened in 1928, this lavish hotel is next to the Avenue Champs-Élysées, one of the most exquisite Paris quarters. The hotel features a grand entryway, modern-style furniture, and an edgy attitude, paying homage to the Art Déco style. Around 15,000 flowers make out the hotel foyer.

The hotel is easy on the eyes, but tough on the wallet, as the most expensive suits can go up to $28,000 per night. The 244 rooms and suites are spacious with classic décor of Louis XV-style, cream color schemes, and luxurious balconies. The hotel offers a wellness center, a gym, and a swimming pool.

If all of this is not enough to gather your attention, Four Seasons Hotel has its own private jet, which can be booked for a worldwide trip. Besides this, the hotel has global itineraries you can choose from, and the next adventure is set for the end of 2023 through Antarctica and South America. 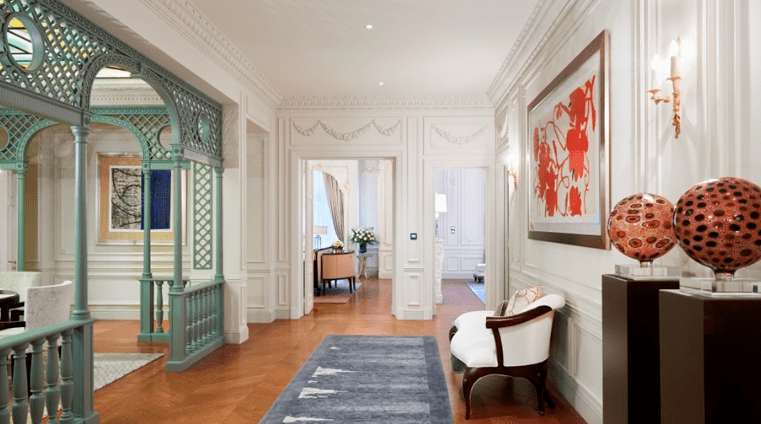 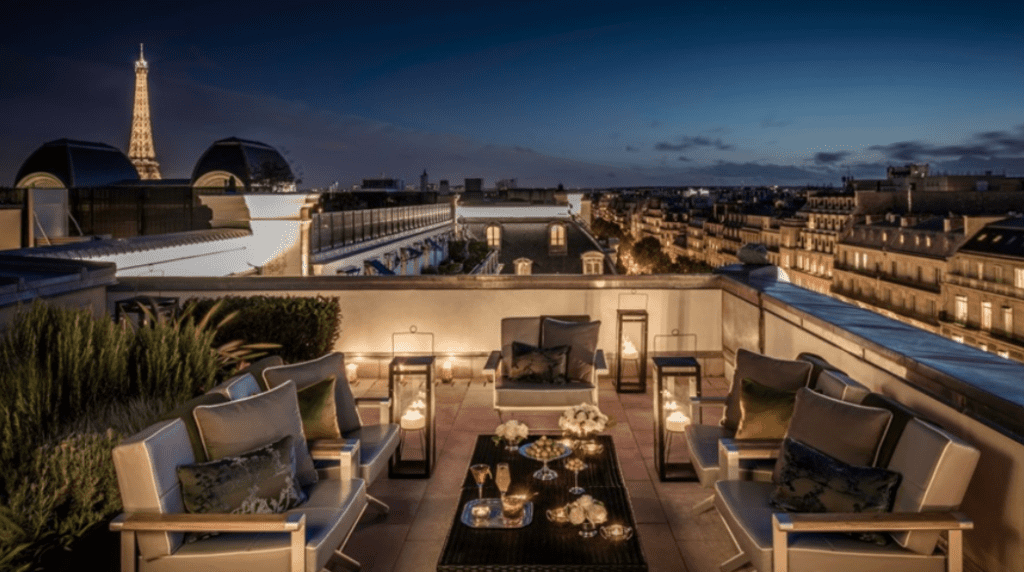 One of the most expensive hotels in Paris is the Peninsula Paris, called Hotel Majestic initially. The hotel is designed in a classic 19-century style mixed with ancient neoclassical architecture. It is close to the Arc de Triomphe, the city monuments, and shopping districts.

The Peninsula opened in 2014 but has become a sensation among luxury travelers and celebrities. The décor is complemented with marble and gold details, and you can enjoy Oscar de la Renta complimentary bathroom toiletries. The hotel is also known for its good dining options.

Even with this staggering price for the 200 rooms and suites, the hotel stays booked throughout the year. The most expensive suite is called The Peninsula Suite, and it can cost up to $29,900 per night. The Peninsula Paris was among the first Paris hotels to receive Forbes 5-star status. 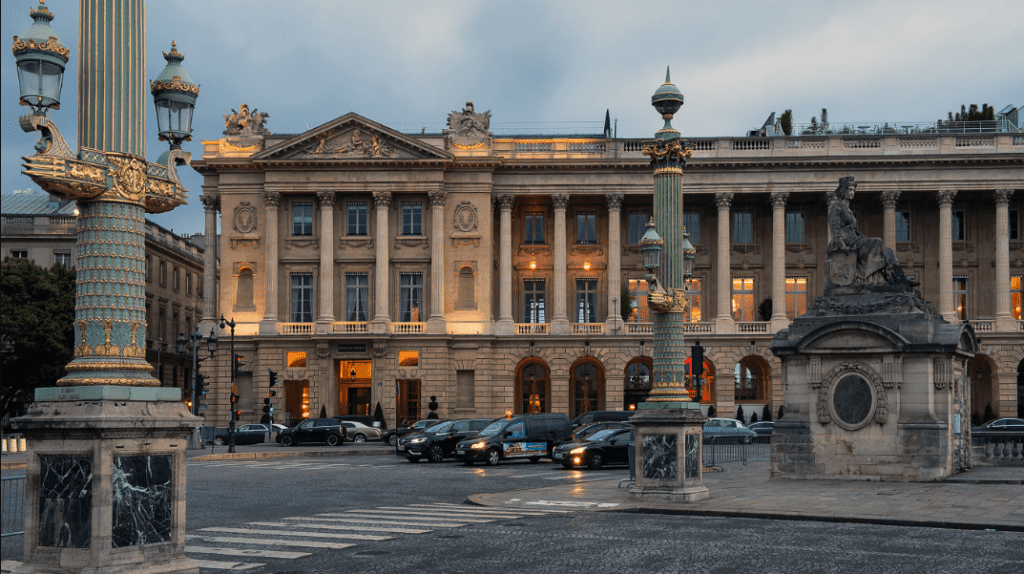 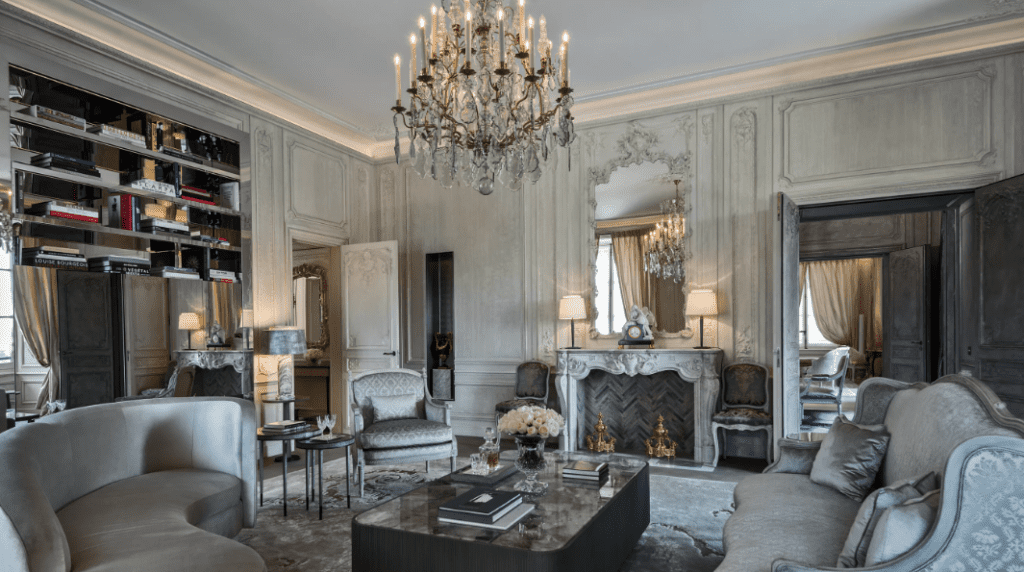 The most expensive hotel in Paris is the Rosewood Hotel and their two luxury suites Les Grands Appartements for up to $36,000 per night. Also known as the Palace Crillon, the hotel was bought by Saudi Prince Mutaib bin Abdullah Al Saud in 2010 for $250 million.

German fashion designer and the former creative director of the French fashion house Chanel, Karl Lagerfeld, was appointed to design the two suites that make the Grands Appartements. The Saudi Prince spent almost $200 million on the Palace reconstruction.