Siamese cats are instantly recognizable. Though native to Thailand, they have been popular in the West since the 19th century, have represented luxury and classiness at least that long, and were incredibly annoying in Disney’s Lady and the Tramp.

These refined cats, typically adorned in straight black ears, cream bodies, and bright blue eyes, tend to be slender, muscular, and beautiful. They are also typically short-haired, with the long-haired variation called a “Balinese,” even though it’s basically the same cat (both are included here). While no Siamese cat is the most common cat in the West, these are the 8 rarest Siamese cats you can find. 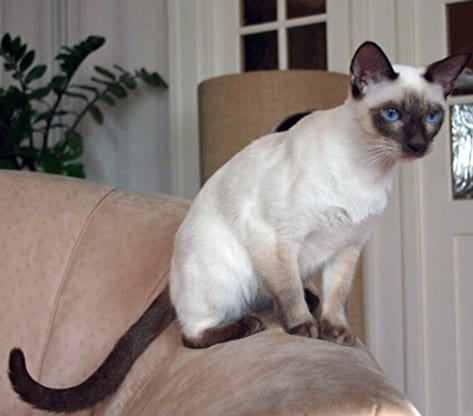 Chocolate Point Siamese cats are a unique genetic variation of the more common Seal Point cats. Aficionados call them “Choccies,” after the dark chocolate-brown points of color on their face, ears, tail, and paws.

These cats are near-impossible to tell apart from Seal Points as kittens, making acquiring them more difficult. They have short hair that remains a pale ivory-white, with very few shades or variations (this sets them apart from adult Seal Points). On the low end, a Choccie can cost around $600. But a well-bred and confirmed kitten will cost closer to $1,200.

Not a lot of Chocolate Point Siamese cats have been spotted and confirmed since their accepted emergence in the 1880s. In fact, the cat registry didn’t even acknowledge their existence as a unique breed until the 1950s. Until then, Chocolate Points were considered to be diluted Seal Points, rather than their own amazing breed. 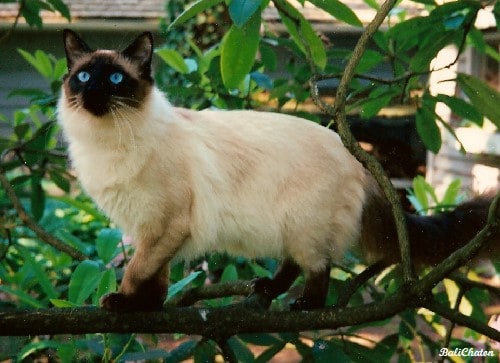 Balinese cats are technically Siamese kittens with genetic variations. Due to this, they have major similarities between normal Siamese cats, including the iconic color points and vivid blue eyes. However, this breed remains rare among Siamese and coveted for its unique traits.

Most Siamese litters do not have any long-haired kittens. This makes it difficult to purposely breed Balinese litters. When they do show, however, they have slim bodies, feathery tails, and medium-length, silky coats.

Around the 1920s, long-haired Siamese kittens started showing up in random litters. No one is quite sure why this happened, but they suspect that post-WWI, long-haired genes filtered into wider circulation from European Siamese cats.

Most people have forgotten that the Siamese cat almost went extinct during the war, making it necessary to introduce similar breeds to keep the litters going. These included Turkish Angora cats, from whose silky, medium-length coat many researchers believe is the source of the genetics that created the modern Balinese. 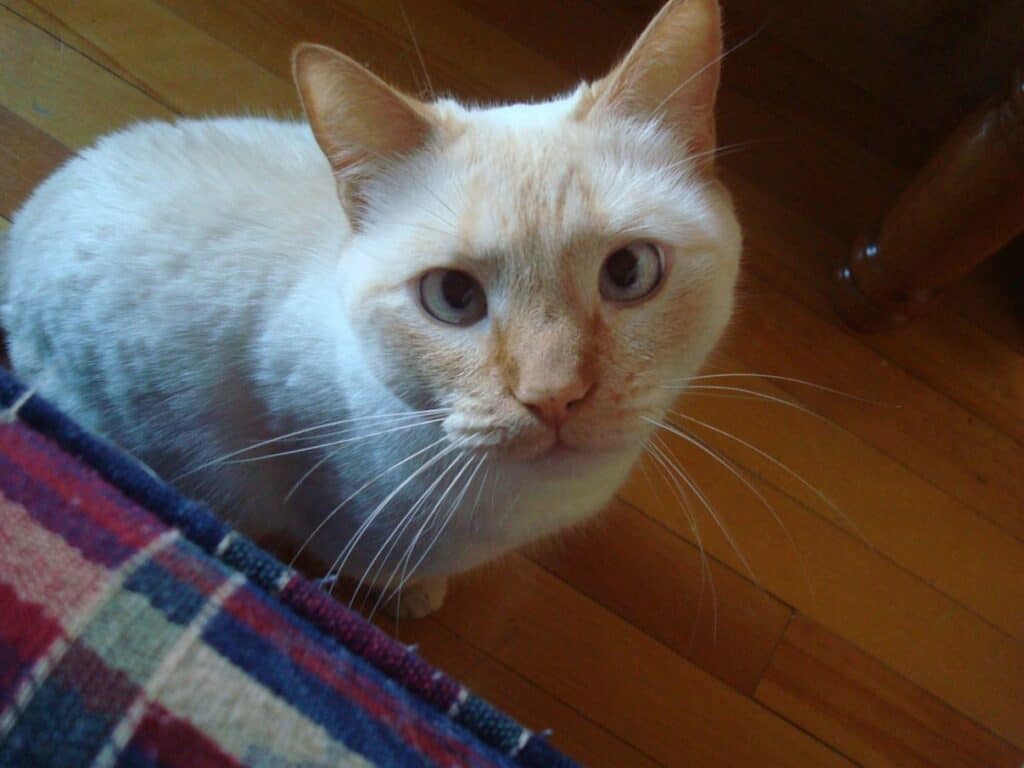 Depending on your area’s registry, the Flame Point or “Red Point” Siamese cat may not even be listed as Siamese. Some people don’t even believe they exist as their own breed, making true Flame Points even rarer. Despite this, they are immediately recognizable by their creamy light orange coats and pink points. When their tails get fluffy and plumed, they look like pleasing little flames.

Flame Points can only be bred by cross-breeding a purebred Siamese with a red tabby cat. They come in variations, both Siamese and Balinese, as well as a Cream Point variation that used to be considered a genetically diluted Flame Point. Most registries now list it separately.

The registries don’t list “flame” as a standardized color option, hence why this breed isn’t always recognized. However, Himalayan cat breeds do have a Flame Point variation and are a cross between Persian and Siamese cats to begin with. We now suspect that this was the source of the name. 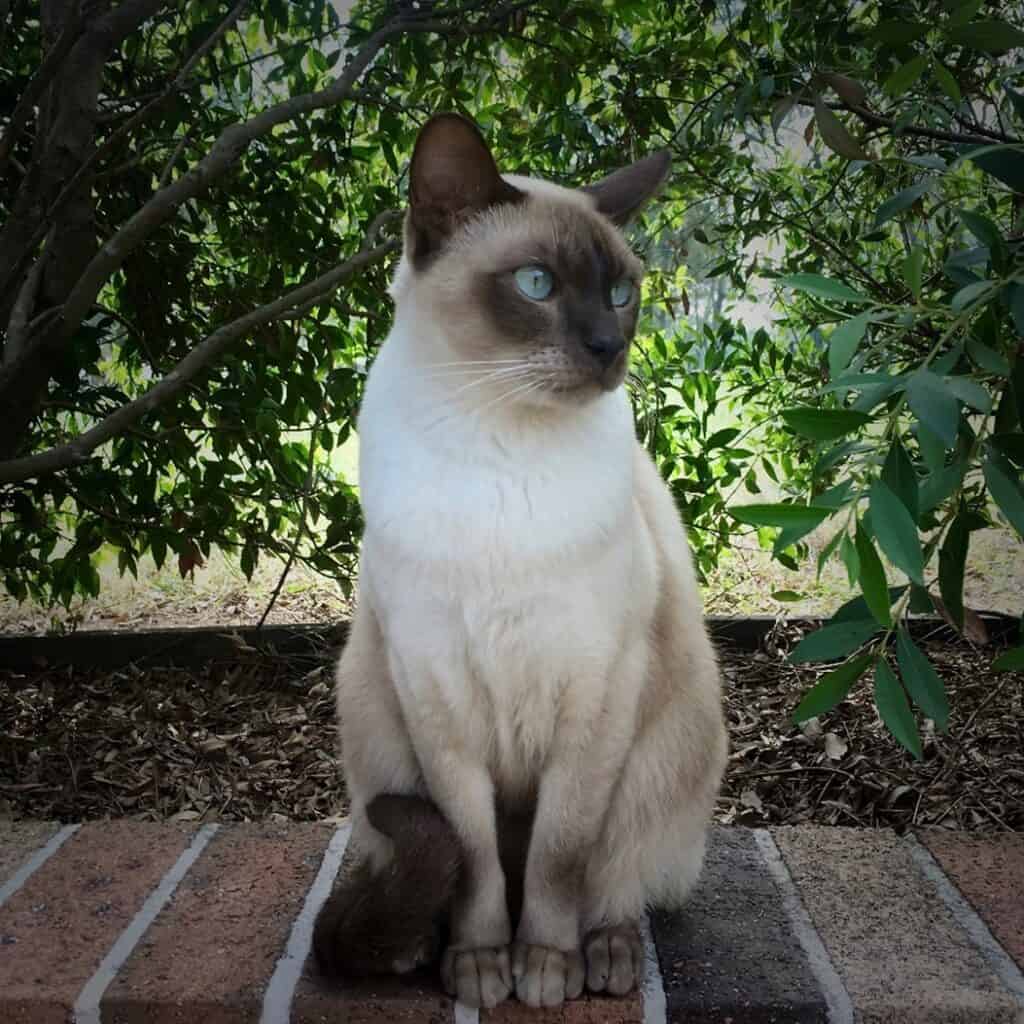 Tonkinese cats are hardy little Siamese variants from Canada, known for being personable, loyal, and hyper. Their coats grow medium-short in length in champagne, blue, mink, and other color patterns. Their coat hugs their muscular bodies without becoming coarse. Instead, it’s shiny, silky, and fine to the touch.

The famous breeder Jane Barletta was largely responsible for adding the Tonkinese cat to the Canadian Cat Association’s registry. It achieved its championship status in 1971, making the Tonkinese the first Siamese breed officially developed in Canada. 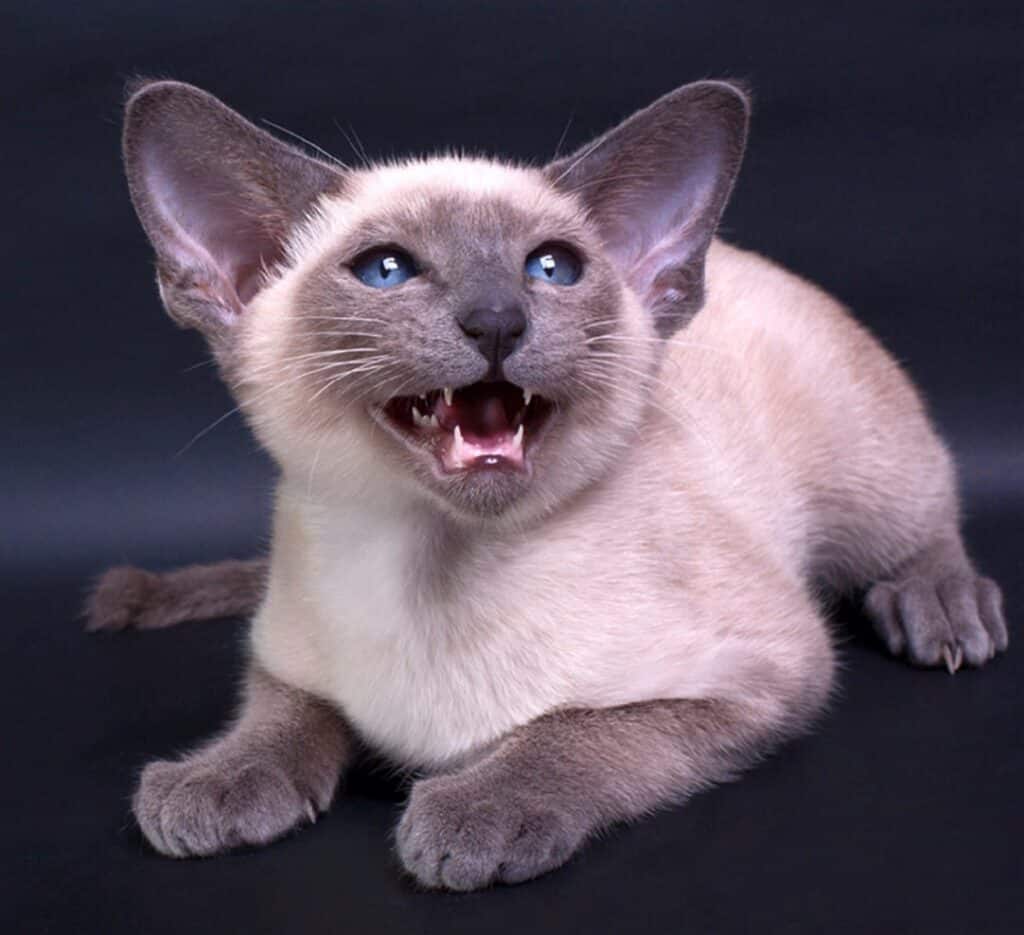 The Blue Point Siamese is a well-regarded Siamese variant that has been around for centuries. In 1934, it gained official recognition, which came with desirability and competition status. The default Siamese color or Seal Point is far more common than Blue Point variants, which has the blue coloring on its extremities and gives off a colder tone in general.

Purebred, especially competition-ready, Blue Point Siamese cats can be very expensive. A well-bred kitten can easily sell for $2,500. If possible, ask to see the parents before buying to make sure you can recognize the iconic muted coloring and blue points vs the more conventional Seal Point pattern.

Not all cats that are offshoots of Siamese breeds are considered true Siamese cats. In fact, there are only four accepted Siamese breeds in total: Seal Point, Chocolate Point, Lilac Point, and Blue Point. So in the case of this cat in contrast to others on this list, you’re paying for a true blue Siamese (literally). 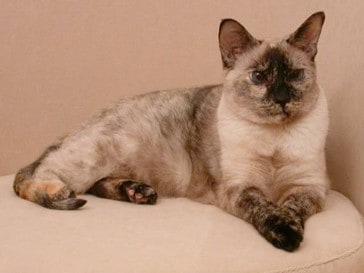 Torties, a variation of “tortoiseshell,” have mottled coats that resemble the speckling on a tortoise’s back. The breeding that goes into these rare, desirable cats (also called “Speckled Points”) is a little complicated. The unusual patterns draw buyers to unique Torties, looking for the most beautiful spot combinations, as well as various colors like Seal, White, Blue, Cream, and Apricot.

Torties are created from the same red gene that can turn a cross between a Siamese and Balinese into a Flame Point. Since two red genes, only carried in the X chromosome, are required to create a Flame Point, most of these litters favor Tortie females and Flame Point males. This is why Tortie MALES are even rarer specimens and will cost even more to acquire.

The Tortie Point pattern is a result of the incomplete gene pairings that favor only one orange gene. The points that change color to cream, cinnamon, chocolate, apricot, etc., and the ones that stay the same due to the other chromosome, together create the Tortie pattern. 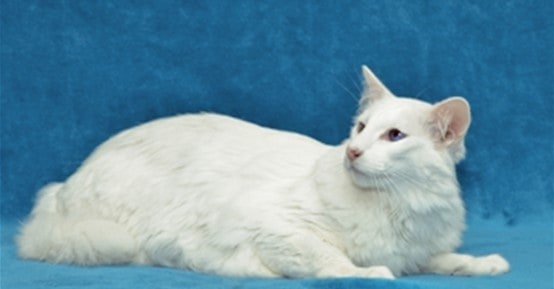 Foreign White Siamese or “Ivory Point” cats have vivid blue eyes that recall a typical Siamese or Balinese cat. However, they have no visual points or color markings. These cats come from a particular breeding stock created by the Scintilla Cattery in the 1960s.

The reason these cats are unique is that most pure white cats suffer from issues of blindness and deafness due to albino genes. However, Foreign White Siamese cats have this color due to their lineage and so they don’t have these other problems.

Technically, Ivory Point cats are not pure white. Beneath their glossy white coats, the conventional Siamese color points in Blue, Chocolate, Lilac, or Seal are concealed on their bodies. This is why they are called Ivory or “White Pointed” cats despite being white all over. The white points obscure the colored points underneath. 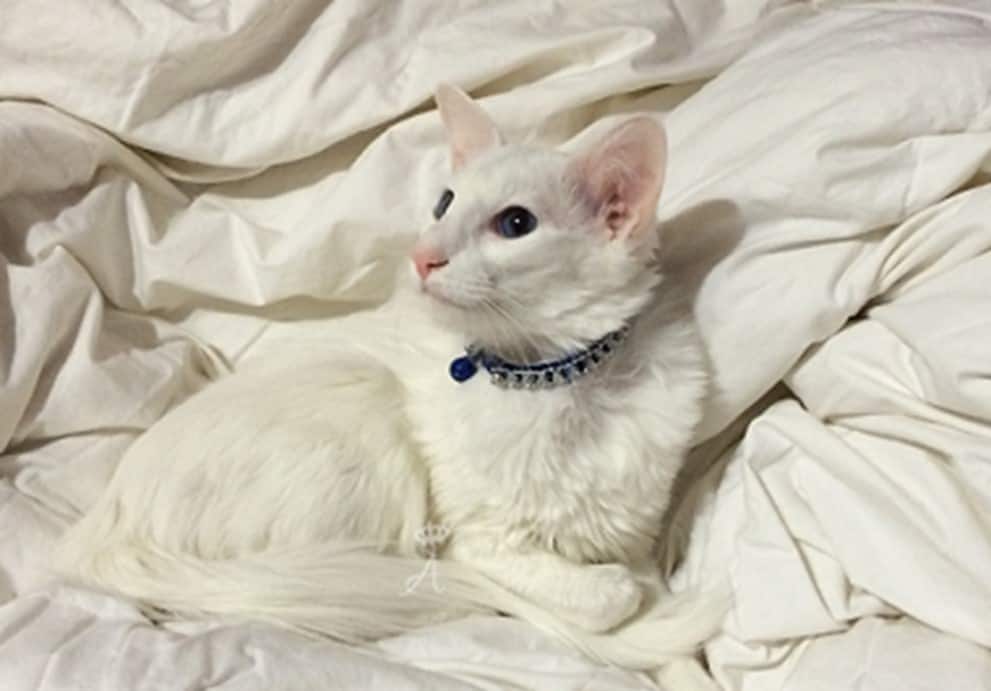 The rarest Siamese cat is the Foreign White Balinese. They combine the rareness of genetically modified white-coat Siamese cats with the additional genetic unlikelihood of the longer-haired Balinese cats.

There is no record of a Foreign White Balinese cat before the year 1991. It was born from a Foreign White Siamese named Thairano White Tiger and a Balinese named Raffinee. The kitten’s name? Starlightexpress – born 8 March 1991. Doesn’t get much better than that.

Siamese cats are known for their loyalty, talkative, busy natures, and luxury. Their slim, often muscular bodies and glossy coats draw stares from collectors who want to own the rarest that this decadent breed has to offer. The more complex the genetic lineage, the rarer the Siamese. The above cats are rare, often new genetic lines, and have become almost painfully desirable for people who love Siamese. For those people, other cats just can’t cut it.

8 Rarest and Most Expensive Seiko Watches Ever Made

10 Rarest and Most Expensive Nintendo Games Ever