Insects play an important role in our ecosystem. We depend on insects for multiple critical ecological functions, including pollination, soil aeration, decomposition, and energy cycling.

Insects are considered to be the most abundant and diverse biomass of animals. Millions of insect species have been identified and described. American biologist Edward Osborne Wilson estimated that at any one time, the number of insects living on this earth is around 10 quintillion.

This sheer number shows how great an impact they have on the ecology.

However, like many other animals, a large proportion of insect species is also threatened with extinction. Increasing use of artificial lights, rapid urbanization, land use changes, and use of pesticides are some of the major factors contributing to the declination of the insect population.

A study conducted in 2020 shows that populations of terrestrial insects are decreasing at a rate of about 9% per decade.

Here, we gathered a list of 8 of the rarest insect species that need immediate conservation efforts. 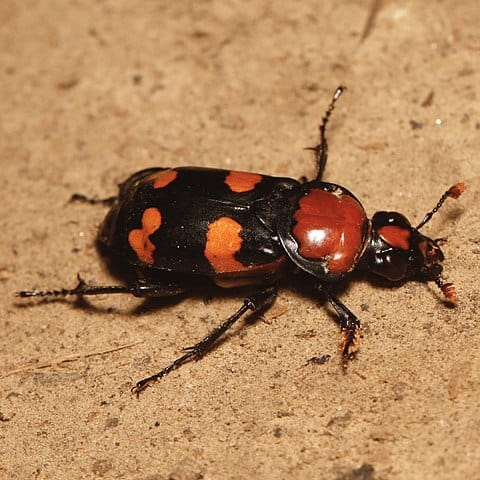 American Burying Beetle, also known as Giant Carrion Beetle, is listed as a critically endangered species in the US. They have a shiny black body with fiery-orange markings on them. The tips of their antennas are also orange in color.

They are carnivorous and feed on carrion. They can sniff out freshly dead animals from up to two miles away. Their antenna contains a special chemical receptor that helps them detect dead meat.

Historically, this beetle could be found in 35 states in the United States. The species was also found in some parts of Canada. However, there was a steady decline in the population mainly due to habitat loss, use of pesticides, and various diseases.

During the late 1980s, the species was protected under the Endangered Species Act, and it made a comeback from near extinction.

American Burying Beetles depend on carcasses for their mating as well. Male beetles locate the carcasses and attract a mate. Also, both males and females participate in parental care. 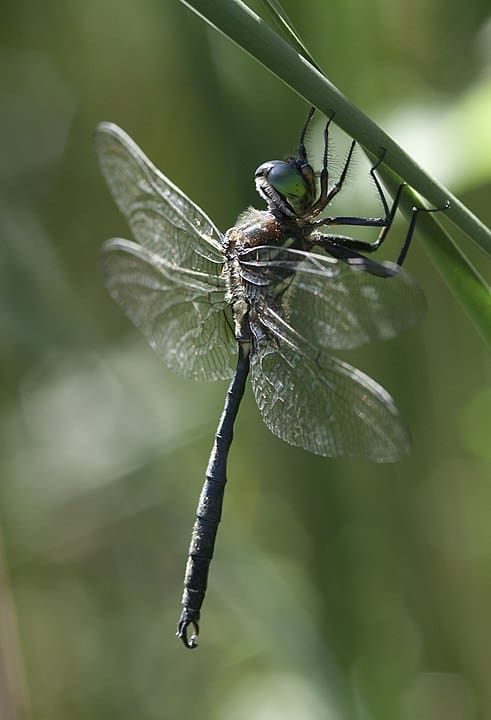 Hine’s Emerald is on the brink of extinction and is one of the most threatened dragonflies in the world. Scattered populations of this species can be found in the Great Lake regions and Missouri. It is also found in Ontario, Canada. The species is legally protected in both US and Canada.

A mature Hine’s Emerald is about 2.5 inches long. Usually, the females are slightly longer than the male. It has distinctive electrifying enormous green eyes. During the initial 1-3 days of their adulthood, their eyes are brown.

After that, it turns into emerald green. It also has a dark green thorax with a pair of yellow stripes.

The wings are clear with an amber tint at the base. At the end of their life, the wings become smoky in color.

The larval stage of Emerald Hine’s Dragon fly may last up to 4 years. It constitutes the majority of their lifespan. 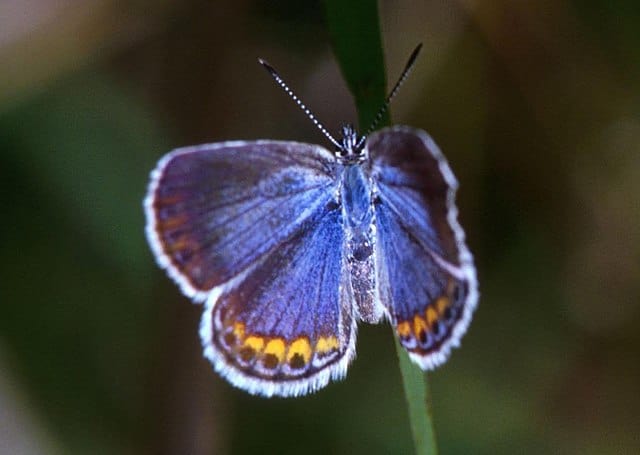 Karner Blue Butterfly was first identified by novelist Vladimir Nabokov in his novel Pinn. It is an endangered sub-species of butterflies found in small areas of New Jersey, New York, Southern New Hampshire, and some of the Great Lake States.

The life cycle of these blue butterflies depends on the wild blue lupine flower (Lupinus perennis). The larvae only feed on the leaves of this plant and leave behind the leaf skeleton.

These butterflies are small in size, with a wingspan of about an inch. The male and female look different from each other. The outer portion of the wings of a female is grayish brown, and the top side is blue.

Irregular bands of orange crescents inside the black border can be seen. The male butterflies have silvery or dark blue wings with a prominent black border.

The Karen blue butterfly gets its name from Karner, New York, where it was first discovered. The place is located halfway between Albany and Schenectady. 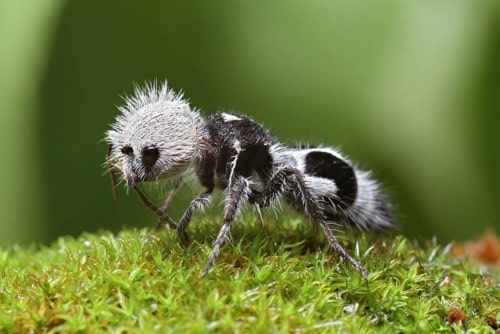 Although it is referred to as Panda Ant, it is not an ant. It is a species of wasp belonging to the Mutillidae family.

The panda ant gets its name for its unique coloration. It has prominent black eyes on a completely white head. Their body is covered with black and white spots. The coloration is aposematic.

They have a powerful devastating sting. Adult Panda ants measure up to 8 millimeters. The males have wings, and the females are wingless.

When feeling threatened, they produce a strong ultrasonic sound via stridulation.

Panda ant is often referred to as a Cow-killer because of their powerful sting. There is no evidence that it can kill a cow, but it is known that it killed a two-pound mammal with its six strings. 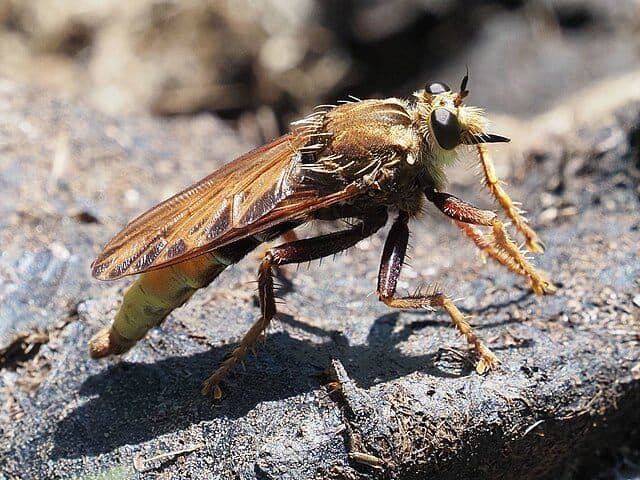 Hornet Robberfly is enlisted as an endangered species in the British Isles. It is a priority species under the UK Post-2010 Biodiversity Framework. It is one of the largest flies in the UK, with a body length of up to 0.98 inches.

Robberfly is a predator and catches smaller flies with its wings. It is fed on dung beetles, grasshoppers, and other flies.

It has a brown thorax, and its abdomen has black and white markings. However, unlike its namesake, it has only one yellow patch on its abdomen. Its similarity of appearance to a hornet helps it protect itself from its predators.

The prime threat faced by the Hornet robberfly is the harmful chemicals used on the livestock. As this fly relies on cattle dung, they get killed or experience serious deformities due to those chemicals. 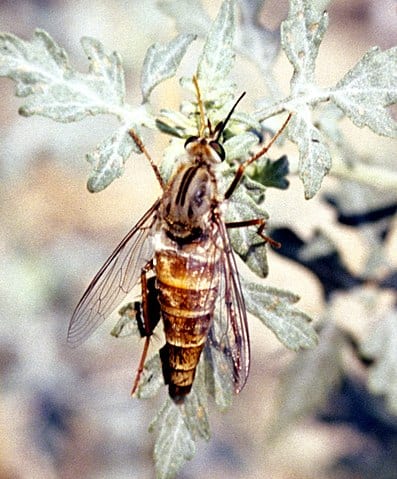 Delhi Sands Flower-loving Fly was the first fly species to be added to the Endangered Species List in the US. These flies have an elongated body that is about 1 inch long. The body is orange-brown in color, and they have transparent wings. On the upper surface of the abdomen, dark brown oval spots are visible. They are fast fliers and are capable of stationary, hovering flight.

Only around a dozen populations of this species exist today, and all of them are restricted within an 8-mile radius in Delhi Sand Dunes.

Originally the habitat area consisted of about 40 square miles. However, due to rapid urbanization, only 2% of that land remains habitable for them.

The life span of the Delhi Sands Flower-loving fly is unknown, but the larval stage may last two years or even longer. 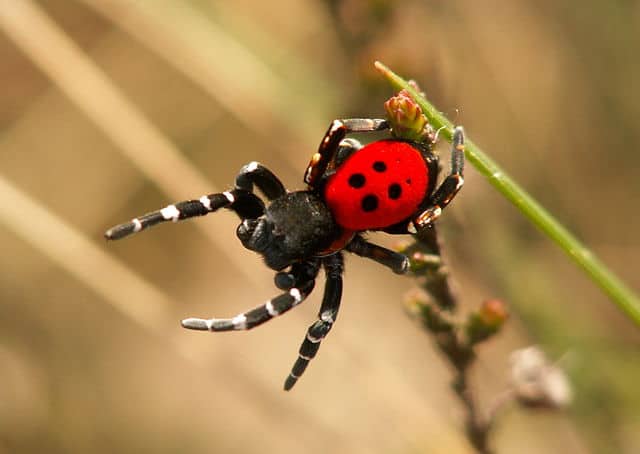 Ladybird Spider got its name because of its similarity of coloration with that of a Ladybird. The back of a male Ladybird spider is bright orange in color with four large and two small ebony spots. There is no white hair on the back and no red hair on its legs. The female ones are jet black.

This spider is enlisted as endangered in the British Data Book and protected under the 1981 Wildlife and Countryside Act. This species was thought to be extinct in the UK for over 70 years until a few individuals were found in Dorset in South West England.

In 1993, the estimated number of Ladybird Spiders in the UK was only 50. However, conservation efforts by various organizations have been successful in increasing the number. Currently, 19 populations and around 1000 individuals are accounted for, but it is still considered extremely vulnerable.

The tree Lobster, also known as the Lord Howe Island stick insect, is considered the rarest insect in the world.

This species of stick insect was thought to be extinct by 1920. However, in 2001, a small population containing 24 individuals was rediscovered on the small islets of Ball’s Pyramid.

An adult Tree lobster can grow up to 8 inches. Female individuals are 25% larger than their male counterparts. The body is smooth and glossy.

The color of the body is dark golden-brown to black and often has a reddish brown tinge.

Once, Tree lobsters were abundantly found on Lord Howe Island. It is believed that these insects disappeared suddenly after black rats were accidentally introduced to the island in 1918.

8 Most Expensive Telescopes Ever Sold

8 Most Expensive Baseball Gloves Ever Sold