8 Rarest Dolphins in the World

Dolphins are known to be intelligent animals. They are believed to be able to engage in complex cognitive tasks such as teaching, learning, grieving, and cooperating.

41 extant species of dolphin are there around the globe. Among them, several species and subspecies are classified as endangered by the International Union for Conservation of Nature.

In general, freshwater dolphins are at a greater risk than the species that live in marine water. In fact, only six species of river dolphins are left in the world, and all of them are either endangered or critically endangered.

Here, we list 8 of the rarest dolphins that are facing the threat of extinction. 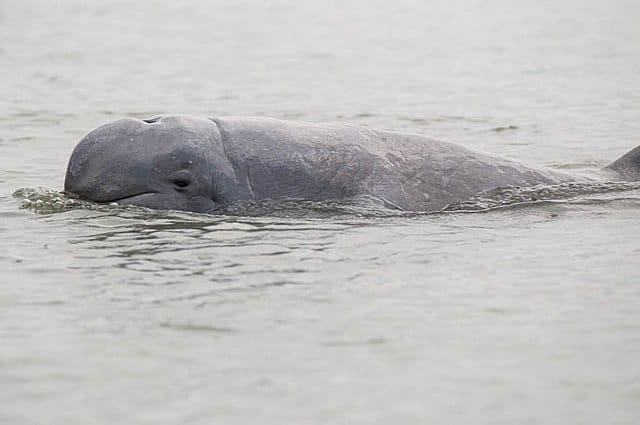 Although sometimes called the Irrawaddy River dolphin, this dolphin species is not a river dolphin. It is an Oceanic dolphin living in brackish water near the coasts, river mouths, and estuaries. Some subpopulations live in freshwater rivers.

Three main freshwater populations can be found in the Ganges, Mekong, and Irrawaddy Rivers.

Pollution and bycatch are two major threats that endanger the existence of this species.

Irrawaddy dolphin looks similar to the baby belugas with their rounded face, bulging forehead, and head with no beak. They have movable lips, which make their face expressive. 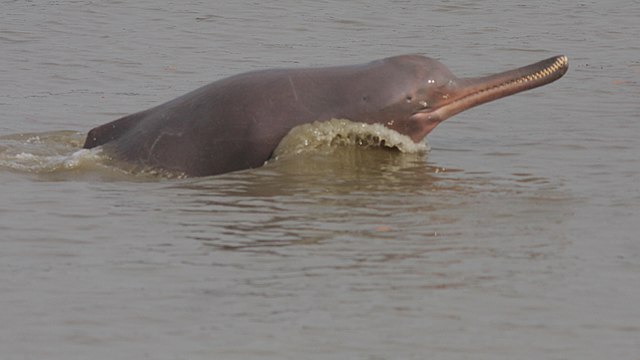 The Ganges River Dolphin was first officially identified in 1801. This species of toothed whale, locally known as Shushuk, is endemic to the Ganges and related rivers.

Historically, this species lived in the Ganges-Brahmaputra-Meghna and Karnaphuli-Sangu River systems in parts of India and Bangladesh.

It was also found in Sapta Koshi and Karnali Rivers in Nepal. However, now it has become extinct in most of these distribution ranges.

Pollution, fisheries bycatch, and declining river flows are some of the biggest threats to the existence of the Ganges River Dolphin.

Ganges River Dolphins are essentially blind. They produce an ultrasonic sound to locate their prey. The sound is echoed by the object of interest, which helps them identify their food source. The process is called echolocation. Even dolphins with clear eyesight use echolocation. 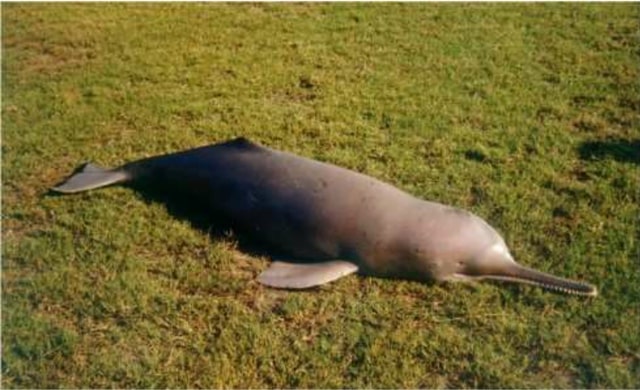 Indus River dolphin can be found in the Indus River system in Pakistan and north-western India. Previously, this dolphin species occupied about 3,400 km of Indus and related rivers.

However, their range has declined by 80% since 1870. Now, the Indus River Dolphin can only be found in the main stem of the Indus and in the Beas River.

This species is locally known as bhulan. Extensive fishing in Indus is the primary threat to this species. It has dwindled the food availability for them.

Besides, deforestation in the river basin and the resultant sedimentation significantly affect their habitat. The construction of dams and barrages is another major threat to their existence. 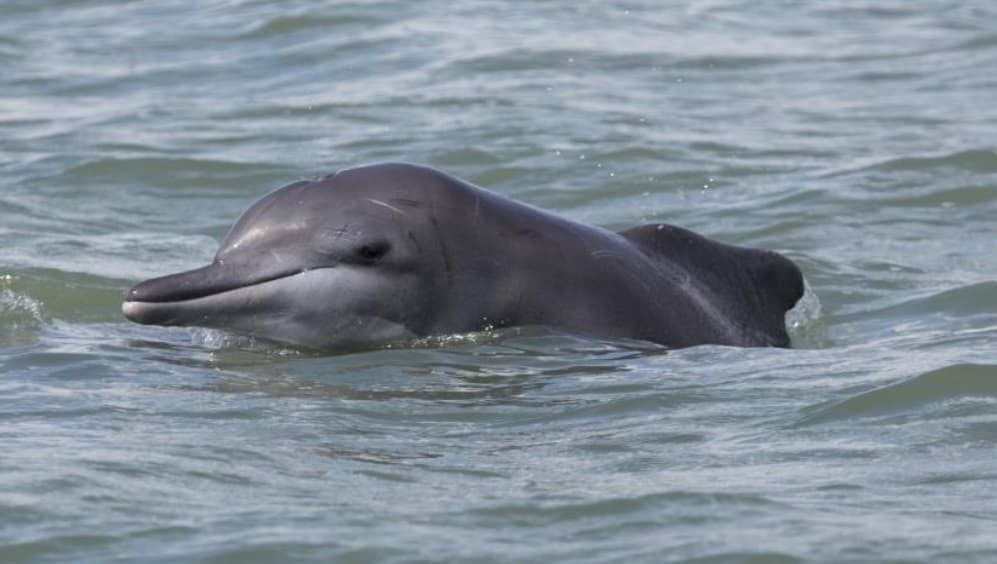 Atlantic humpback dolphins are found in shallow, coastal waters along the west coast of Africa, from western Sahara to Angola.

Although they often come in close contact with human activities throughout the range, Atlantic Humpback Dolphins are one of the least studied dolphin species. Thus, data on their population, ecology, and habitat is scarce.

Atlantic humpback dolphins are known to be shy and prefer to keep their distance from boat engines. They typically travel in small groups. They may forage cooperatively as well as independently.

Climate change is one of the major threats to this dolphin species. The fluctuation of water temperature has forced them to adapt to the changes. Now, they can only live in the shallow warm waters near the coast of the ocean.

Scientists believe if the world temperature continues to rise, it will become difficult for this species to survive.

The Atlantic humpback dolphins help Mauritanian Imraguen fishermen in fishing. They dive the fish towards the shore to make it easier for the fishermen to catch them. 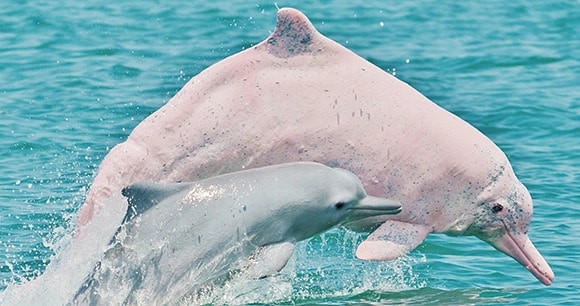 Eastern Taiwan strait humpback dolphin, also known as the Taiwanese white dolphin, is a subspecies of Indo-Pacific hump dolphin. It was first discovered along the western coast of Taiwan in the year 2002.

While the Indo-Pacific hump dolphin is classified as vulnerable, this particular subspecies is considered critically endangered. A survey conducted from 2002 to 2005 estimated the population size to be less than 100 individuals.

A later study in 2012 confirmed that the population of this rare dolphin declined to only 62 individuals.

Water pollution from industrial and agricultural waste, sound pollution from plastic debris, industrial development, extensive fishing activities, increase in marine traffic, and habitat loss are some of the immediate threats faced by this dolphin subspecies.

The Eastern Taiwan strait humpback dolphin has a pair of protruding eyes. They can see clearly both in water and air. 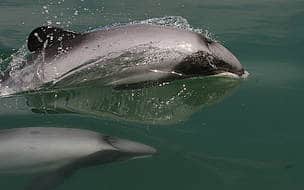 Māui dolphin is a subspecies of Hector’s dolphin. It is one of the rarest and smallest dolphin subspecies in the world. The only population of this subspecies is found around the west coast of New Zealand’s North Island.

In 2021, New Zealand Government estimated the current population size of the Māui dolphin to be 54 individuals. However, some deaths were reported after the survey.

The major threats to the Māui dolphin are climate change, fishing, mining, tourism, and noise pollution. 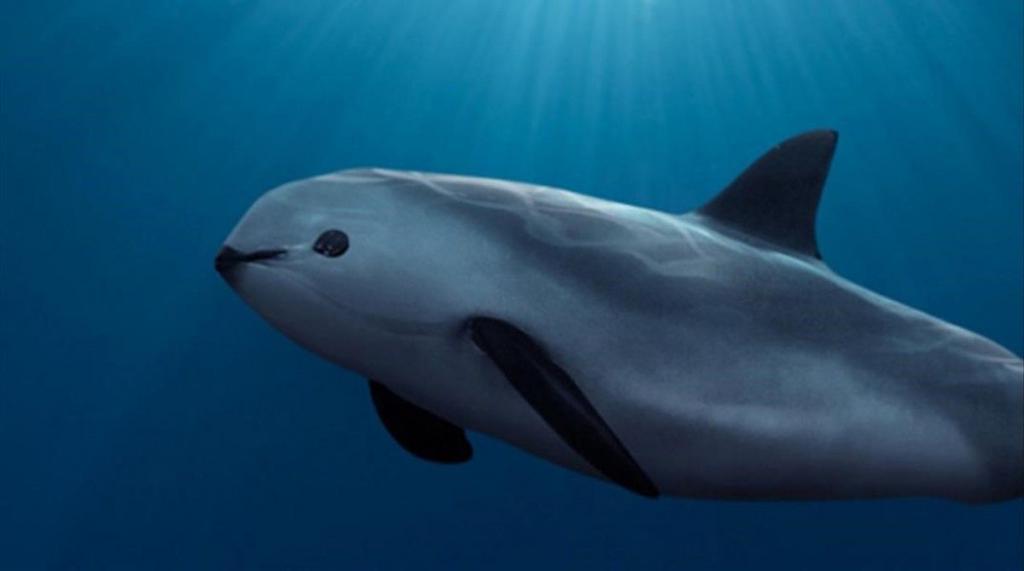 Vaquita is the smallest species of all cetaceans. It is essentially a species of porpoise.

Vaquita is the rarest marine mammal that is on the brink of extinction. In 1997, the existence of around 600 vaquitas was documented. Now there are only 10 individuals exist in the wild.

They live in a small area in the northern part of the Gulf of California, in Baja California, Mexico. Bycatch in gillnets is the primary reason for the decline of its population.

Vaquita was first described by American marine mammal biologists Kenneth S. Norris and William N. McFarland in 1958. They described the species by studying a skull specimen found on the beach. The first living specimen of Vaquita was found in 1985.

Genome sequencing done in 2017 shows that the ancestral vaquitas had experienced a population bottleneck in the past. It explains how the existing individuals remain healthy despite the small population size. 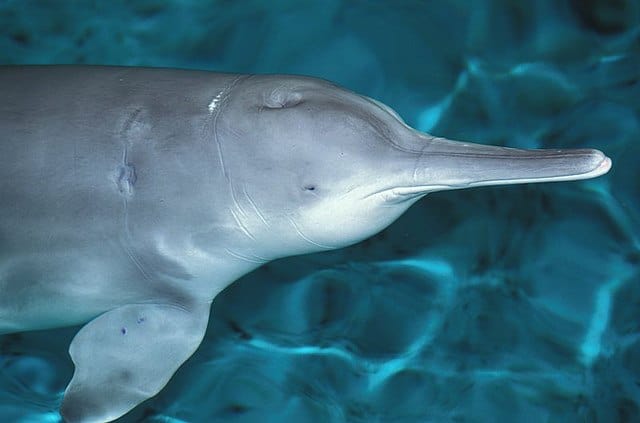 Baiji is a freshwater dolphin that is classified as critically endangered, possibly extinct, by the IUCN. It has not been seen in 20 years. This make the Baiji the rarest dolphin in the world.

The last known living baiji Qiqi died in 2002. In 2007, a large white animal in the Yangtze River was videotaped by a man. It was tentatively identified as a baiji, but no confirmation was made.

Baiji dolphins historically lived along the middle and lower reaches of the Yangtze River. It was first described in the ancient dictionary Erya sometime during the 3rd century BC.

Around 12% of the world’s population lives within the Yangtze River catchment area. It creates a huge amount of industrial and residential waste that flows into the Yangtze.

Besides pollution, habitat loss, bycatch, and collisions with boats and ships are some of the other factors that led to the extinction of baiji.

The local fishermen and boatmen regarded the baiji dolphin as the Goddess of the Yangtze. In this region, the dolphin is considered a symbol of peace and prosperity.