10 of the Most Expensive Pearls Ever Found

Before cultured pearls were widely available in the early 20th century, naturally occurring pearls were so rare that they became a sign of royalty.

Despite a long documented history, experts aren’t exactly sure when people started harvesting pearls. However, the first pearls found by humans were probably discovered along seashores as people hunted for food.

Although natural pearls are usually the most expensive, cultured pearls remain a popular option. Cultured pearls were invented in 1893 by Kokichi Mikimoto, which opened up the pearl market to a bigger portion of the population.

Today, the world’s most expensive pearls have a huge price range — but most cost more than $1 million.

These are the top 10 most expensive pearls. 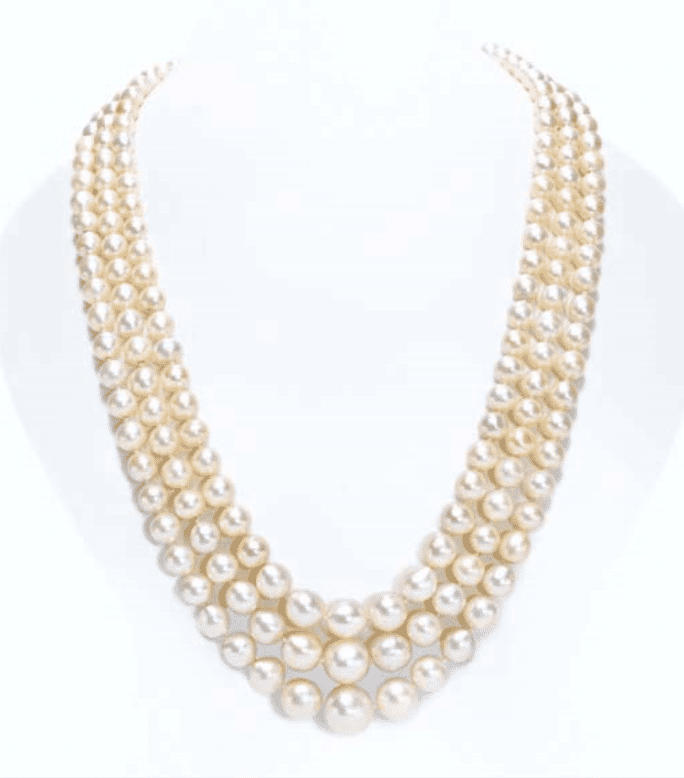 This collection of pearls was used to form a simple, three-strand necklace. The design was crafted by Cartier in London and the back features a diamond clasp for securing the jewelry.

The pearls themselves were examined by the AGTA Gemological Testing Center. The Center is run by the American Gem Trade Association, an organization working to “represent and further the interests of the natural colored gemstone, pearl and cultured pearl industries” in the U.S. 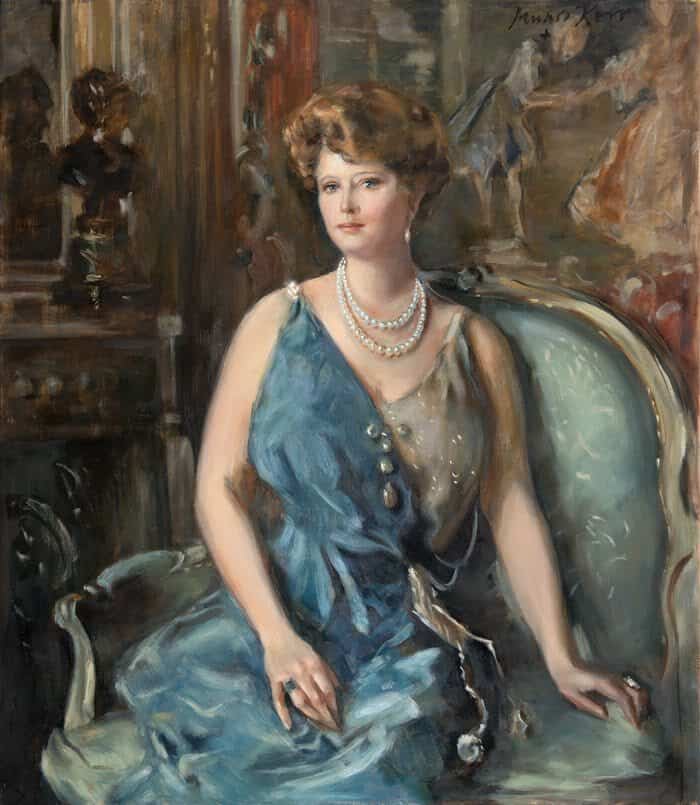 When Pierre Cartier was just getting started as a jeweler in New York City, one of his first major pieces for sale was a million-dollar pearl necklace. Like other Cartier jewelry of the time, the pearl necklace was created by Pierre’s brothers in Paris before going up for sale in NYC.

Interestingly, the Cartier pearls never really sold — they were traded. When the wealthy Mr. and Mrs. Plant passed the Cartier storefront in the late 1910s, Mrs. Plant fell in love with the pearls, but Mr. Plant didn’t have $1 million in cash. So, instead of buying the pearls, Mr. Plant offered to trade his mansion for the expensive set of 128 pearls. The Plants had already begun construction of a bigger home near 5th Avenue, so the deal was made. 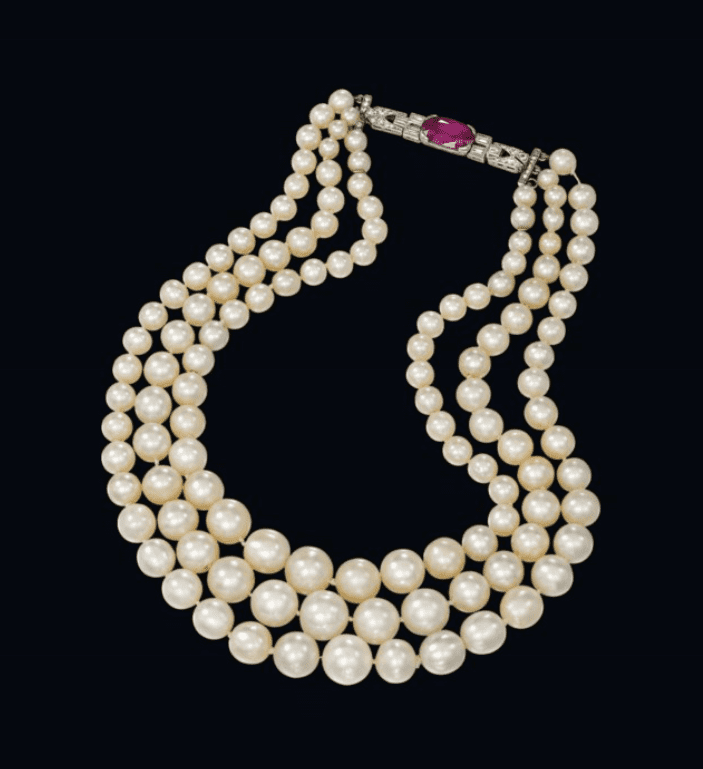 In 2013, Christie’s auction house sold a set of pearls for $1.6 million. Almost all of them were natural and from saltwater, except one that was cultured and one from freshwater. Accompanying the expensive pearls was a report by The Swiss Gemmological Institute verifying the type of pearls available.

The pearls measure from 10.7 to 4.1 mm and the necklace featured three strands. The final sale price was approximately double its estimated value of about $800,000.

Although its exact age is unknown, Christie reports this necklace is from around 1925.

At the same auction that sold these pearls, a natural pearl brooch sold for more than $600,000. 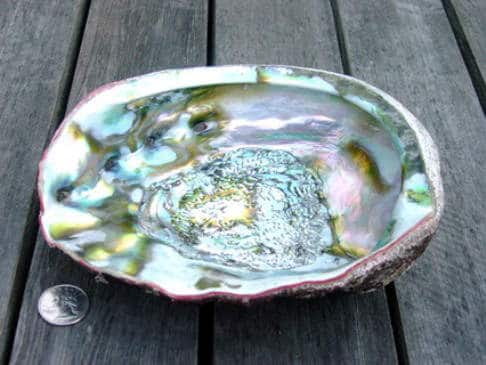 Although there aren’t any pictures of Big Pink available, the pearl came from a red abalone, a marine species related to snails and sea slugs. Red abalone shells typically have swirls of color similar to abalone pearls.

Even though horn-shaped abalone pearls are much more common than perfectly round versions, Big Pink is still worth millions. Wesley Rankin has refused to sell it despite several interested buyers, but estimates say Big Pink is worth $4.7 million.

Reported Value: $4.82 million
Origin: Paris, France
Year Sold: 2007
Interesting Fact: These pearls were made into a necklace by Cartier in Paris 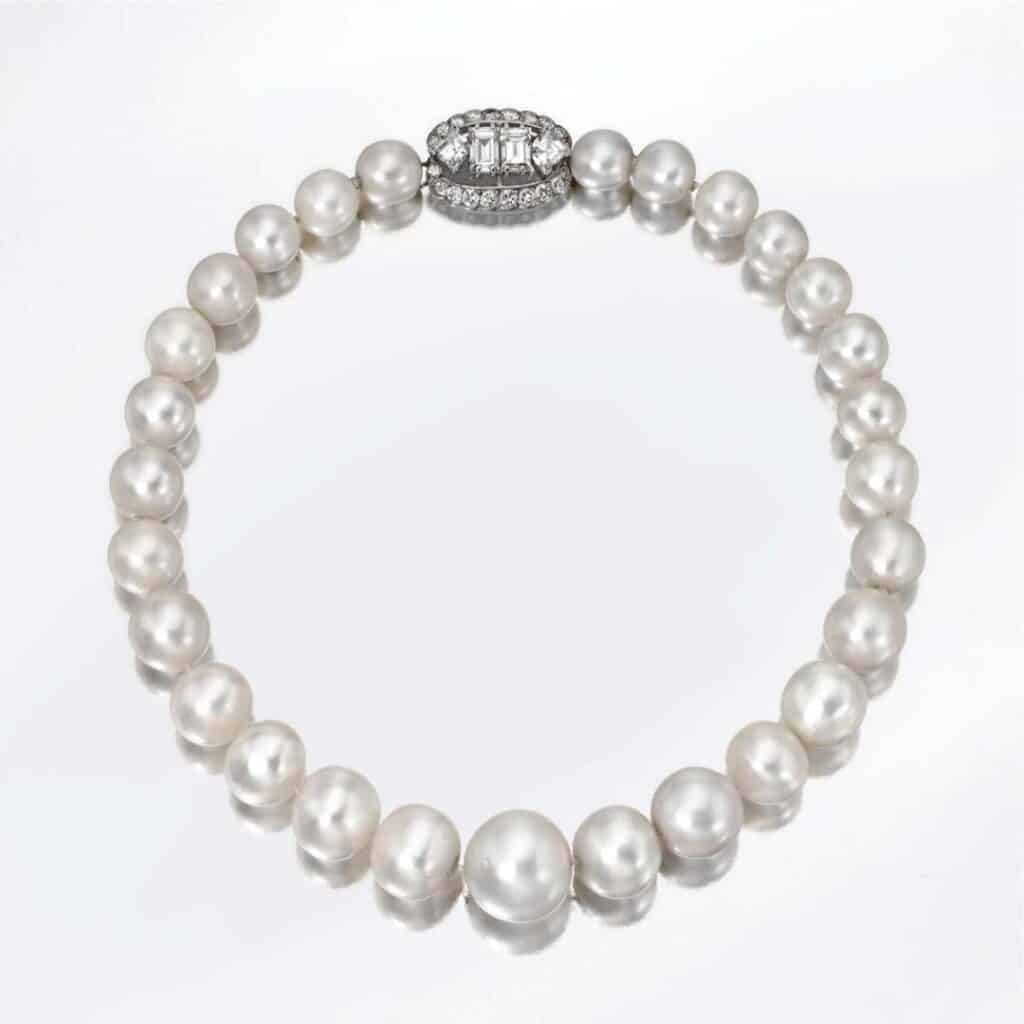 In 2007, Sotheby’s auction house sold pearls owned by the Duchess of Windsor for nearly $5 million. The beautiful pearls were made into a necklace by Cartier in Paris according to the signature on the clasp.

After close examination, experts said the pearls are natural and almost perfectly round.

Interestingly, these pearls were originally owned by Queen Mary before she gifted them to her son, the Duke of Windsor. The Duke then gifted the pearls to the Duchess, who was often photographed wearing the expensive necklace.

The clasp of this necklace features two emerald-cut diamonds surrounded by 20 smaller diamonds. 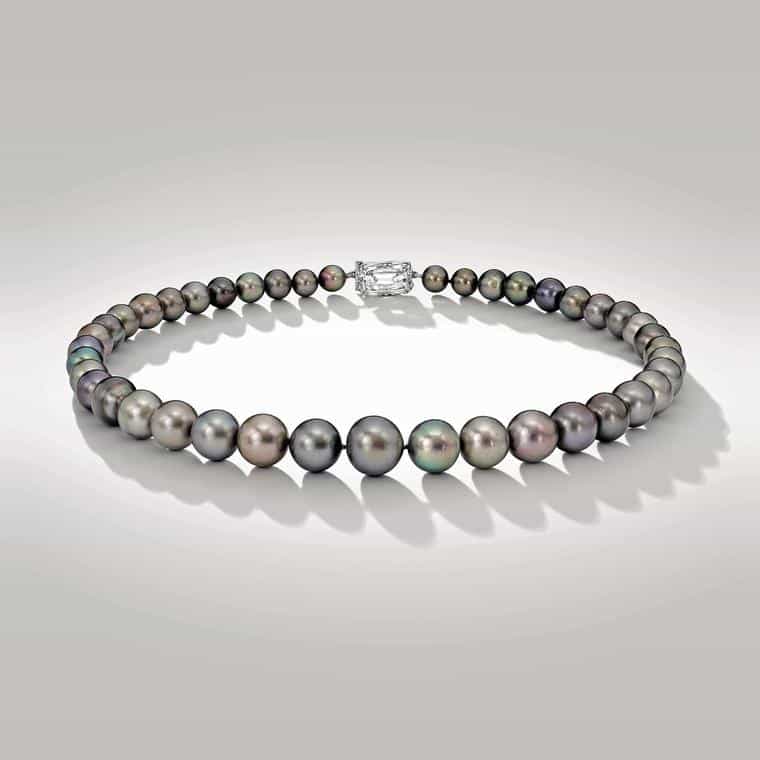 These pearls were originally owned by Viscountess Cowdray, also known as Annie Pearson. Annie was an English society hostess, philanthropist, and suffragist. Annie also served as President of the Women’s Liberal Federation in the early 1920s.

In October 2015, a pearl necklace owned by Annie was sold by Sotheby’s for more than $5 million. Interestingly, the very same set of pearls was sold for $2 million less at an auction held by Christie’s just three years earlier.

Annie Pearson died in 1932. Her expensive pearl necklace went up for auction for the first time a few years later in 1937.

Reported Value: $7.09 million
Origin: India
Year Sold: 2007
Interesting Fact: These pearls were made into a necklace by Cartier 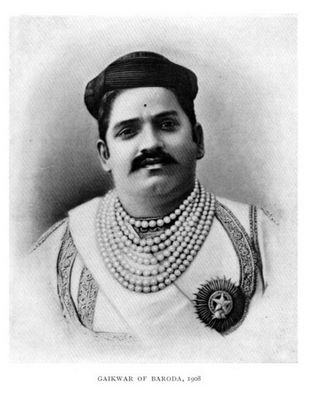 These pearls sold for more than $7 million at an auction held by Christie’s in 2007. The set of 68 natural pearls was made into a necklace by Cartier, likely sometime after Jacques Cartier’s first trip to India in 1911.

According to Christie’s, the Baroda pearls are a “legendary” and “coveted” treasure. Although pearls have historically been popular among royalty across the globe, Christie’s says “the pearl was treasured most [in India]…and was used prolifically, adorning the magnificent royal dress of the Maharajas and woven into elaborate screens.”

With such a steep price, the Baroda pearls easily earn their place among the most expensive pearls in the world.

The Maharaja of Baroda is considered one of the most notable jewelry collectors of the 19th century. 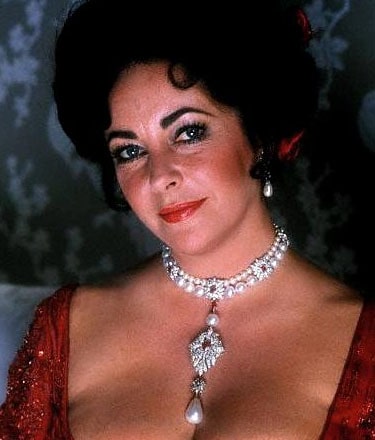 In 2011, Christie’s auction house sold a pearl owned by Liz Taylor for nearly $12 million. The pearl was a Valentine’s Day gift given to Liz by her husband. Liz eventually commissioned Cartier to create a necklace to hold the pearl.

Interestingly, the starring pearl has roots way back in the 1500s. When Mary Tudor of England became engaged to Spain’s Phillip II, the pearl was given to her as an engagement gift. The pearl was subsequently owned by a succession of eight Spanish kings until the early 1800s. The pearl eventually made its way to an auction in 1969, where Liz Taylor’s husband purchased it.

This pearl is also known as La Peregrina. 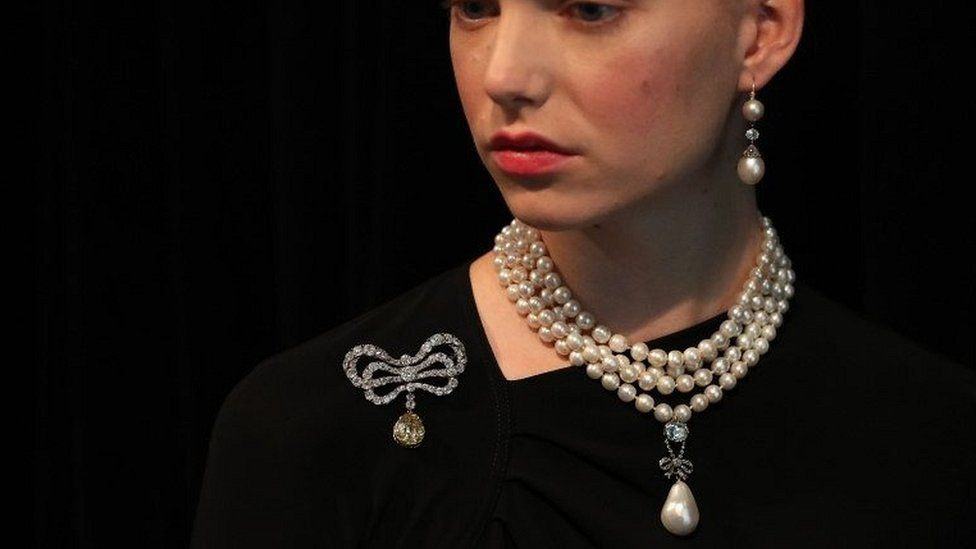 In 2018, a collection of jewelry owned by Marie Antoinette was auctioned by Sotheby’s in Geneva. The collection included a pearl and diamond pendant that was valued at just $2 million — but it ended up selling for a steep $36 million. That price got the buyer a total of 119 natural pearls, meaning they paid more than $300,000 per pearl.

Beyond Marie Antoinette’s ultra-expensive set of pearls, the Sotheby’s auction sold a diamond ring featuring the French Queen’s initials and a lock of her hair (yes, seriously). 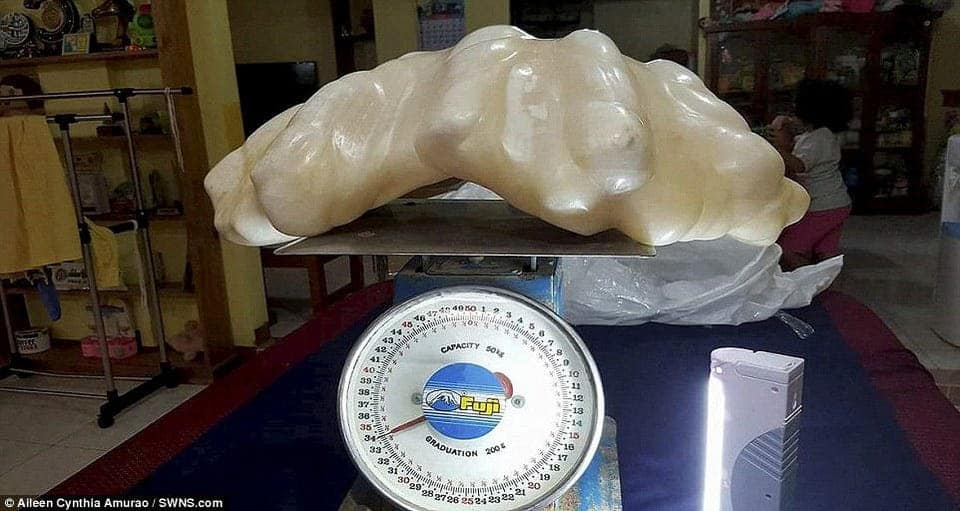 The fisherman’s pearl is the most expensive pearl in the world.

This huge pearl was discovered by a fisherman in the Philippines. After his anchor got stuck on something, the unidentified fisherman dove underwater to free his boat. On the way down, he noticed the anchor was lodged on a shell. Once he freed the anchor, he brought the shell back up with him — and discovered the most expensive pearl on the planet.

Amazingly, the fisherman didn’t know the value of the pearl and kept it under his bed for a decade as a “good-luck charm.”

The fisherman eventually brought the massive pearl to his local tourism office, where its true value was revealed.

As such a big pearl, this incredible find probably won’t be cut down to create jewelry — partially because cutting down pearls diminishes their luster. Instead, the fisherman’s pearl will remain in the Philippines as a tourist attraction.

This pearl came from a giant clam (Tridacna gigas), a member of the clam family that can grow to more than 440 pounds. Giant clams rarely produce pearls, making the fisherman’s pearl even rarer.

8 Most Expensive Rapper Chains Ever Worn in History

8 Most Expensive Masks that Money Can Buy